The opinions I share here, by the way, may not necessarily be shared by the rest of the Tech Envy team. (In other words, Stef, my sister, surely has something to say against at least one of my talking points, in which case, she is sure to blog about it.) 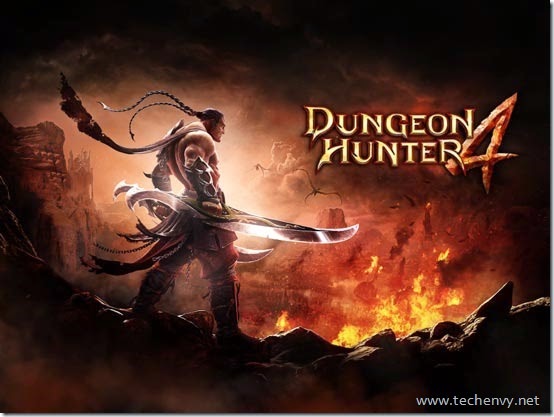 When you’re hooked, you’re in trouble. Play Dungeon Hunter 4 at your own risk!

Just when most gamers all over the world have passed their verdict as to which gaming platform is best, Apple and Android give them all a run for their money, what with the many game apps now available for mobile and tablet use. For instance, there's Dungeon Hunter 4, the second game app officially reviewed by Tech Envy, one that gives the word addiction a new meaning.

Put simply, Dungeon Hunter 4 is a hack and slash game. But its RPG and mission-oriented elements give it a twist that make it more palatable.

If you like zombies and gore, leveling up in Dungeon Hunter 4 is going to be second nature. Brace yourself, gamer, as this game will start alienating you from your real life.

What I really love about the Dungeon Hunter 4 game app is that it's not a "freemium" (an app which allows you to use certain features only if you purchase its paid version). It's a free game - no features withheld whatsoever.

It does offer in-app purchases if you want extra spending power. But that's not a requirement for you to unlock the whole game or enjoy its full storyline, something I'm thankful for.

Anyway, if you like playing solo, that's fair. But you can play the game with a random (or specific) party, called "co-op" mode, or play against other players (multiplayer) to see who emerges the victor. Different dungeons permit different ways to play the game. Some, for instance, will allow solo or co-op playing. There is one dungeon, on the other hand, that is strictly multiplayer.

Although we expect the usual "kill as many monsters as you can" game plot, the storyline of Dungeon Hunter 4 provides a goal-oriented way for you to uncover the different dungeons. Each dungeon has a unique set of monsters, with different missions for you to complete as well. Finished missions give you both experience points and in-game money which you can spend on gear and weapons.

Note: Do not confuse these levels of difficulty with your character's overall level. You continuously level up the more you play the game as your experience points add up.

Aside reform the regular quests that unlock all the dungeons, you also get week-long and weekend challenges. These promise extra points and rare charms. I usually wait for the weekend challenge as only a teaser is provided until it starts.

Lastly, a blood match challenge is available to those who respond better to immediate feedback. I personally love this more recent addition to Dungeon Hunter 4!

In the blood match challenge, you play against monster bosses of increasing strength until you run out of time (5 minutes). Every swing against the enemy results in bloodshed - and your success against a continuous stream of bosses contributes to the blood you collect in the vial.

Different milestones are set in the blood match challenge. You get a prize whenever you reach a milestone as you fill the blood vial - and boy, are the prizes drool-worthy or what!

Watch out for the hardcore mode – it makes the whole game pretty interesting. After a while, you start getting a little too complacent while leveling up, which is when you will be happy there’s a hardcore mode to liven things up. You get more difficult monsters and bosses while replaying the entire storyline.

As you level up, more weapons and armor are unlocked. You can purchase these using either gemstones or your in-game money.

If you need more gemstones or money, you can buy these via in-app purchases. Take note: I have leveled up all the way to level 83 without spending a dime.

“Even without in-app purchases, you can definitely get ahead.”

I know you will hear about how unfair these in-app purchases are. But honestly, there is nothing wrong with a game developer making a buck or two from a job well done. Besides, even if you refrain from making any kind of purchase while playing this game app, you should still be able to enjoy it in its entirety.

Leveling up is going to be tough after a certain point, but every addicting game has a wall you need to break through (think Flappy Bird, although Dungeon Hunter 4 isn't as ridiculously impossible to complete). But these hurdles are scattered strategically throughout the game, just so you don't start to feel smug and bored.

(Let me say this as early as now: If I review a game wherein its in-app purchases significantly affect gameplay, I am sure to mention it straightaway. I hate being kept from the rest of the game by in-app purchases, especially redundant ones!)

You can choose from four different classes: blademaster, battleworn, warmage, and sentinel. Here’s my character, now at level 82. I chose a blademaster for my first character.

Random thought: What if my level 82 blademaster in Dungeon Hunter 4 for iPad could hack and slash enemies in real life? Shiver.

You can choose from four different character classes, as you can see below. If you have ever played the MMORPG Ragnarok before, think of the battleworn as a merchant (who later becomes a powerful blacksmith), the blademaster as a swordsman, the warmage as a mage, and the sentinel as an archer.

Your character can either be male or female. You can also have several different characters in the game, so you can switch from one character to another anytime you wish.

The graphics are excellent, with each scene almost always screenshot-worthy. I fell in love with the reflective sheen of my character's weapons and armor. Most of the gear you will see in the Dungeon Hunter 4 game app will have the same polychromic to prismatic hues that change depending on how light strikes them.

Accompanying background music and sound effects are equally superb - I suggest that you turn the volume up when you play through the different dungeons for the first time.

You can also try visiting your character page in-game. When you do, make sure you get your character to do a 360-degree turn for you so that you can see him in his full glory, primped-up gear and all.

Thankfully, Dungeon Hunter 4 took care of that problem without being killjoy about it. In this game, there are still different charms of different shapes, but these slots are not specific to any weapons set. In other words, you can use a certain charm for, say, either your head gear or your weapon.

The armor consists of head gear, arm gear, trunk armor, leg gear. You may also win or purchase a ring for extra power.

You can also craft your own weapons and armor if you wish. You will need different types of stones to do this. Stones are often picked up in dungeons and sometimes won in the blood match.

When you’ve leveled up high enough, you unlock the capacity to craft tier 100 weapons and armor. Make sure not to waste your precious stones before then! Joining the blood match also helps increase your stone stash.

Dungeon Hunter 4 game app review for iPad by yours truly, Adrian dela Cruz, as performed on March 25, concludes with an overall rating of 4.5 out of 5 stars. Dungeon Hunter 4 has set the bar high, becoming the stick against which all other RPG or action game apps are measured. Dungeon Hunter 4 is an elegant action RPG app with regular mission and quest updates, making it a must-have game app for iPad gamers who just must have their dose of ick and gore.

Half a star is deducted for bugs, slow customer support response, and lack of humor (which is a matter of preference, I know, but I'm the one giving a rating anyway).

The game is highly addictive - no surprise there. But I found the plot too serious. I remember my sister playing Inotia, another RPG app, and I was quite entertained by the script and the storyline.

“Although the English in Inotia is just horrible, its script is actually too funny that it's awesome! Sadly, Dungeon Hunter 4 is no Inotia. Of course, I'm nitpicking at this point.”

I also don't like the idea that I might lose all my game info if I have to reinstall the game for any reason. The idea of that happening is almost enough to keep me from investing my time and effort. Gameloft, do something about this!

I did encounter one major bug, which the developers themselves acknowledged. After I emailed Gameloft a complaint regarding the hardcore mode, I was told about a week after (yeah, took that long) that the problem I mentioned was a known issue and that they were still working on it.

Unfortunately, the problematic hardcore mode in question is still stuck up to now. Full disclosure: That's actually why I stopped playing Dungeon Hunter 4.

“The verdict: Dungeon Hunter 4 is definitely something you should download if you're looking for a good RPG that doesn't disappoint. Prepare to lose track of time... And to get fired for never making it to work for here days in a row.”

But be warned: This game kept me from my homework for days on end. Do not download this game if you have important tasks on queue. Man, if only someone warned me before I tapped on the install button!

Dungeon Hunter 4 is available on both Google Play (Android) and the Apple App Store. But if there is any lesson you must learn from this Dungeon Hunter 4 game app review, it's that you should download at your own risk.

Dying never got this fun!

But what's a few comatose days of extreme gaming if it's because of a wonderful game app like Dungeon Hunter 4, right? I say, have fun if you can!

Your Feedback on Dungeon Hunter 4?

Have you played DH4 before? What do you think of the game?

Leave your answer in the comments section. What should they have done better? What did they do better?

In other game app reviews:
Letterarium: The perfect game for your frenemies?
Dark Meadow: Humor + Horror!

Once again, thank you for dropping by Tech Envy. We will be featuring more fun games in the future, so bookmark us and subscribe to us! You can also join us on Facebook, Twitter, and Instagram for updates and giveaways. In fact, we have one giveaway that ended just three days ago!