If you found Flappy Bird addictive, this review of the iPad game app Letterarium is for you. Don't miss out, especially if you're looking for a no-nonsense, straight-to-the-point word game that doesn't have layer upon layer of quests and missions. Spoiler alert: Keep reading to find out how you can use Letterarium as a weapon. 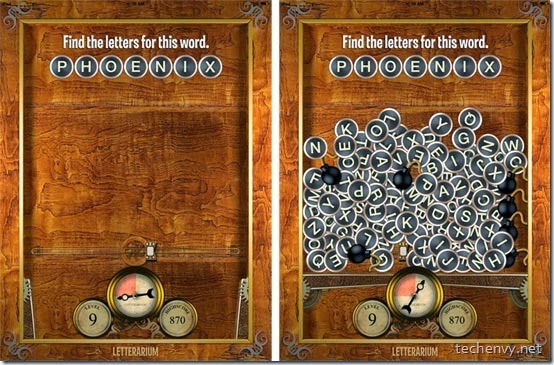 Take note: Letterarium, unlike other word games, doesn't offer a save option. If you lose, your game starts over instead of allowing you to start where you left off. This is arguably why it has the addictive potential of Flappy Bird which, as of this moment, has become quite a phenomenon.

In Letterarium, you will be asked to tap the letters that fall to the bottom of the screen for you to spell out the given word. It's easy enough in the beginning, with three-letter words to start you off.

But the game gets harder with every round. As the words become more complex, so do the challenges. There will be complications, such as bombs, moving pulleys, and disappearing letters.

The interface is user-friendly enough, even for people who don't really play games on the iPad. After all, the object of the game is simple: tap the right letters to spell out a specific word. If you hate complicated game instructions, Letterarium is meant for you.

Admittedly, I can't imagine playing this game on an iPhone. Tapping the letters in a crowded and small game screen can be tricky... unless you have the hands of an adept surgeon, that is.

Graphics, visual effects, background music and sounds do not disappoint. To me, there is something almost hypnotic about the sound the game makes when you complete a stage or when the round tiles fall to the bottom of the screen.

Don't expect to get too far ahead. You are bound to lose within seconds - a minute or two, if you're lucky.

And if you think Letterarium sounds unforgiving, you're probably right. There are no charms, bonus weapons, or extra lives. When you're out of turns, it's games over for you.

But remember that frustration is a great motivator in many games. Well, who knows? You just might fare better than the rest of us normal mortals. Do us the favor of satisfying our curiosity: If you do download Letterarium, let us know here at Tech Envy as to how far you can go.

This Letterarium game app review for iPad by yours truly (Adrian dela Cruz - that's my name, hello there), as performed on March 15 but published 5 days after, concludes with an overall rating of 3 out of 5 stars. I can see Letterarium becoming the favorite pastime of word aficionados who want their games without the unnecessary fluff. Letterarium is a no-nonsense word game which banks on your reflexes and capacity for recall, a nice app to play among friends and family for some healthy competition.

I personally prefer complicated games, thus my preference for quest-based games (as you can see in this Dark Meadow game app review). Also, is it possible for Letterarium to evolve into a game app where one's progress can be saved? I hope so, if for the sake of people like me who don't really fancy the likes of Flappy Bird. Of course, that's all just a matter of preference on my part - and a matter of prerogative on the developer's.

You can purchase Letterarium from the Apple App Store for only USD $0.99. Try passing it around when you're at home and see who gets a higher score.

The verdict: Letterarium is not just a word game app reminiscent of classic memory games; it is also a potential weapon against thunder-stealing frenemies!

Challenge your bossy officemate to a game of Letterarium on your iPad. Show this game to that annoying colleague of yours who just must do everything perfect - and watch as his life falls to pieces right in front of you!

Okay, maybe that's going overboard. But you get the idea.

Let's make this a little more fun. Take a screenshot of your Letterarium score and send it to us via email! Whoever submits the highest score for this game app will be featured here on Tech Envy. Ready? Hit the install button and let's start the geek fest! And if you’re in the mood for more games, see the rest of our game app reviews.