5 Compelling Reasons Not to Buy the Cheaper Apple iMac

In an attempt to get Windows users to join the iFaithful crowd, Apple just released a 21.5-inch iMac that’s about $200 (about PhP9,000) cheaper than regular Mac desktops. But here are 5 reasons you shouldn’t buy the cheaper Apple iMac – that is, if you don’t want to end up with what can only be called a “lemon”. 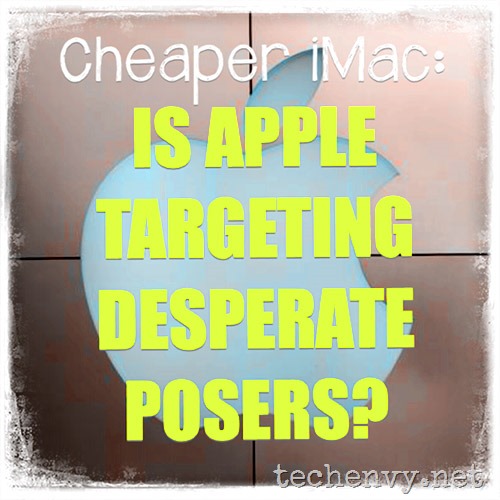 We appreciate Apple’s efforts to make their computers more accessible to the masses. But there are 5 reasons you shouldn’t buy the cheaper iMac. And believe us when we say the reasons are compelling.

Would Steve Jobs turn in his grave if he found out Apple is now selling cheaper versions of his beloved gadgets? Given the market trend, probably not; after all, the shift to cheaper, more reasonably-priced smartphones and computers is one that’s a long time coming. However, Apple’s recent move to offer cheaper iMacs is nothing short of “not worth it.”

“Has Apple done it?
Has the cheaper iMac finally made Apple appear, well, cheap?”

Apple’s computers have always boasted of quality, if not of versatility: This is something even people using Microsoft-run devices can’t deny. This is probably why Windows users still compose the majority of consumers – that and Apple’s price tag.

It’s no surprise that, to convert Microsoft users, Apple has been releasing cheaper versions of their arguably overpriced gadgets.

The gadget that started the “Hey, you can afford us!” campaign: the iPad mini.

It all started with the iPad mini. Created to cater to those who want an Apple gadget but couldn’t afford one, the iPad mini did prove tempting to tablet users who would otherwise have ended up with an Android.

The iPhone 5c: Tempting the Android user, one colorful but still overpriced smartphone at a time.

Then came the iPhone 5c series. Cheaper than the usual iPhone and donning a new polycarbonate exoskeleton, the iPhone 5c became an aspirational smartphone for Android users hoping to shift to Apple for a change.

Now, it’s the iMac’s turn. But is cheaper really better, or is it just a desperate poser’s attempt to look like he belongs to the iHerd?

5 Reasons Not to Buy the Cheaper Apple iMac

The rich and elite can afford to throw away their money. The more discerning buyers, however, know better than to jump on the bandwagon, which is why they listen to reason.

Speaking of reason, here are 5 compelling reasons for you not to buy the cheaper Apple iMac.

You can’t upgrade the RAM of the cheaper Apple iMac.

Okay, maybe you can, but you will need more than just simple tech savvy to accomplish that feat. After all, the cheaper iMac’s 8GB RAM has been attached (read: soldered) onto its motherboard. Yikes – talk about getting stuck.

Yes, it’s about $200 cheaper. But you’ll still be dishing out about a thousand dollars for an iMac. Put that way, the “discount” isn’t worth it after all.

Buying an Apple computer that deliberately stifles hardware improvement is giving money to a company that promotes oppressive elitism.

There’s nothing wrong with Apple offering a cheaper gadget. But ensuring that consumers never get the chance to upgrade if they choose the cheaper option is oppressive. Apple is being such an elitist snob.

You are better off spending your $1000 on a customized PC that gives you every penny’s worth.

Well, that PC might not look as sleek and pretty as an iMac, but we’re sure you’re not that superficial.

Buying a cheaper iMac doesn’t make you look cool; it just makes you look like a cheap poser.

If you have a thousand dollars to spare but settle on a second-class iMac, it begs the question: What are you trying to prove?

More importantly, whom are you trying to impress? In any case, you’re already failing.

Don’t fall for the trap. Save yourself the heartache and settle for a computer that you won’t regret spending on. Leave the iMac to people who don’t mind investing in a lost cause.