Do dogs dream? If you had a dog, you would know that the answer was yes. Now, imagine yourself watching that dream from a dog’s point of view – that would pretty much be how it feels like to play Doggins, an iOS game app! 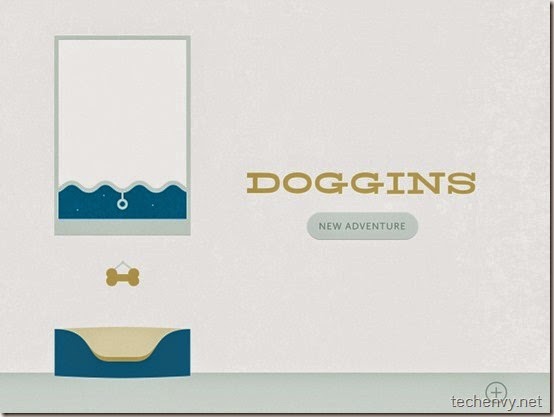 Doggins looks quite charming, doesn’t it? Well, it is.

Giveaway alert: Doggins is not a free app. It costs $3.99 – I know, bummer! But here at Tech Envy, you can get the Doggins app absolutely free.

Doggins for iOS: Barking at the Right Tree

If you love dogs and games, it makes sense for you to gravitate towards Doggins, a game app made for iOS. But before you hit the install button, there are 5 surprising things about the Doggins app that you need to know.

And because we love you, we are giving away promo codes for lucky readers. Just keep doing what you’re doing – reading, that is – and you’ll find out how to download the app for free. (Update: There are two promo codes left! Hurry!)

Doggins Game App for iOS: 5 Things that Might Surprise You

Before you join the giveaway, you might want to learn a few things about Doggins. It might whet your appetite for a brand new app.

Now, here’s what we honestly think about the Doggins app. (Disclaimer: I received the app for free for review purposes but this will not influence my opinion.)

Here are things you need to know to complete the Doggins game.

A cute terrier travels to the moon (not something he planned, I’m sure) and finds himself in the middle of a squirrel-initiated plot to destroy humanity. As man’s best friend, he has no choice but to stop the squirrels from succeeding.

Wanna stop an evil squirrel from taking over the world?
(Sounds so cute despite the morbid undertones, doesn’t it?)

Of course, it’s not that easy. You have to help him figure out how to thwart the “evil squirrel” scheme.

The simple graphics give a charismatic appeal. If you like your kitchen clean as a whistle, I get the feeling you’ll enjoy playing Doggins.

Clean and simple – if you’re not yet a minimalist, you will be after this game.

Game and app developers should always aim to provide simple controls instead of ridiculously complicated ones. It’s a matter of courtesy. Thanks to the team behind Doggins for being courteous, not to mention brilliant.

You don’t need gamer reflexes to finish the game. You will, however, need a lot of zen-like patience.

If you’re the type of gamer who doesn’t like getting stuck, you will either end up looking for walkthroughs or you’ll learn how to meditate while playing Doggins.

Can’t find the secret room above? Sleep on it. Seriously.

Although the game is not difficult, you might need to tinker with it in different ways before you finish its entirety.

Tip: If you get stuck, just close the app and play it again tomorrow. Besides, given its short game time, it’s best savored slowly rather than swallowed whole.

If you want to play Doggins, here are six things for you to expect.

Note from Tech Envy team on Doggins: Doggins is a great addition to the list of games you can play when you’re burnt out and in need of a breather while you “recharge”. Doggins is a simple but engaging swipe-tap adventure employing the skills of a terrier who aims to thwart an evil squirrel plot. This Doggins game app review for iPad by Adrian dela Cruz, as performed on July 16 and published four days later, gives an overall rating of 3.5 out of 5 stars. (It would have been a 4.5 if it was longer!)

Rating for the Doggins game app for iOS:

Don’t be fooled by the cutesy puzzles; after all, your aim in this game is to help a dog thwart a scheme to end humanity as we know it. The children’s-book appeal also gives it an irresistible charm, one that almost doesn’t belong in a game with a plot to end civilization. Too bad it’s too short.

Doggins is an adventure app that proves how a game doesn’t need complicated graphics to provide great visuals. It is engaging without being too complicated, offering puzzles that don’t get you too frustrated.

Purchase Doggins on the App Store
– or read on to get it for free.

If you’re curious what tricks the dog’s got up his sleeves, try the game out yourself! You can win the game and install it on your iPad or iPhone for free if you win any of the two promo codes we are giving away.

Here’s how you can join our short but sweet Doggins app giveaway.

The Doggins giveaway ends on August 5. Winners will be chosen via a randomizer. All winners must use their promo codes before August 7 or they forfeit their chance to win.

…You might want to join the Grand Rounds Med Book Giveaway by our resident blogger, Dr Stef dela Cruz! She’s giving away comic books and medical books all year long. To join, just do a little sleuthing on her Facebook page.

What other app would you want us to feature? Let us know. Leave a comment and we just might take your advice!