Something arrived in the mail that made my day – it’s the new ASUS Zenfone 2 Laser! I was so excited to try out another promising gadget. Setting my excitement aside, however, I was actually trying to quell my anticipatory grief.

I had fears that it might disappoint. What if it didn’t meet my expectations? What if it wasn’t all it was cracked up to be? 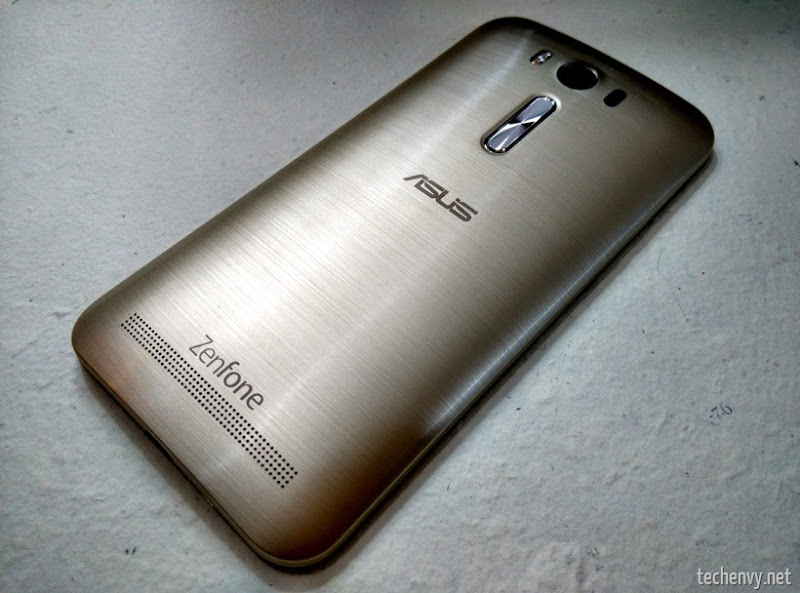 Meet the ASUS Zenfone 2 Laser. (By the way, that’s pronounced a-SUS, not EY-sus.)

But after about a week of tinkering with my new toy, the verdict is finally in: I believe this wonderful smartphone is actually underpriced.

I can almost see your jaw dropping. Well, allow me to explain myself.

5 reasons the ASUS Zenfone 2 Laser should be more expensive

For the sake of people who want a great phone, I’m positively happy that the Zenfone 2 Laser is available at an affordable PhP7,295. Finally, a gadget I can afford to buy for my brother!

Just so it’s clear: The fact that it’s underpriced is actually a good thing. Finally, gadgets aren’t as ridiculously expensive as they used to be.

Here are five reasons the ASUS Zenfone 2 Laser should come with a bigger price tag.

Do we have any phone out there worth less than PhP8k that has a Gorilla display? No? Didn’t think so. 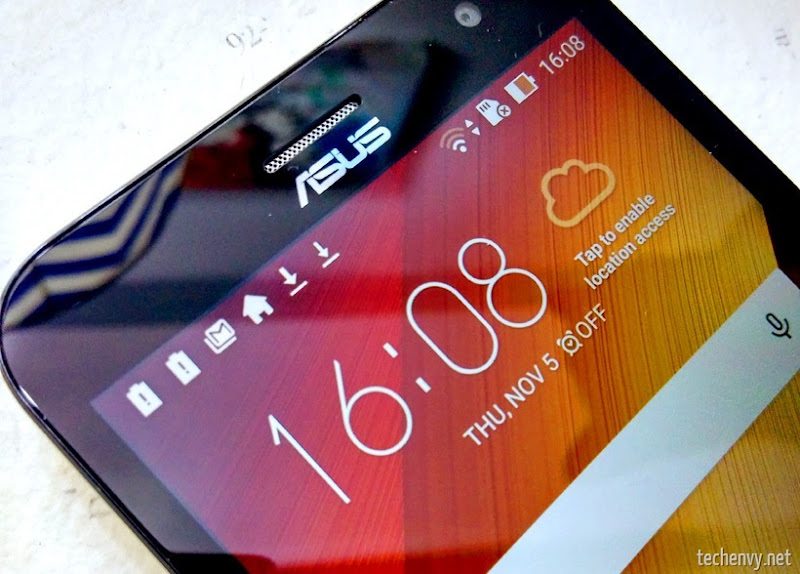 Gorilla glass? Wow, Zenfone 2! You have outdone your predecessors.

It’s perfect for klutzes like me. True story: I dropped my HTC smartphone the first day I bought it. I also dropped my Xiaomi Mi3 the first week after it arrived. Predictably, I dropped my iPad mini as well, giving it a visible dent in one corner!

You can understand how my old phones have multiple scratches on their screens. Well, here’s some good news: Gorilla Glass 3 has 50 percent less resistance to breakage compared to the new Gorilla Glass 4!

This Zenfone with its Gorilla 4 display, in other words, is one tough cookie. (Fellow doctors, I dare you to damage the screen with your sharpest scalpel! You won’t succeed. Trust me.)

2. The laser auto-focus technology allows you to take photos faster than ever

I tried it. I was so impressed by how fast I could actually take pictures! I still couldn’t believe I could take photos near and far by just moving my phone back and forth.

I can click away at a rate of about 3 photos every 2 seconds – no need for me to click on an object to focus. It does the focusing on its own, doing it in a split second!

This laser auto-focus is one of the reasons the ASUS Zenfone 2 Laser is a winner. It uses infrared laser to focus on an object, giving you super short focus times.

3. Its 8MP camera can produce photos taken by a 50MP lens

As someone who uses a phone camera for articles and blog posts, I’m all for a back camera that takes photos with a 52 megapixel resolution!

Using the normal mode, all I get from the back camera is an 8MP shot. I can use the HDR mode to deal with contrast issues, sure. But what makes me so excited about the camera is its Super Resolution mode. 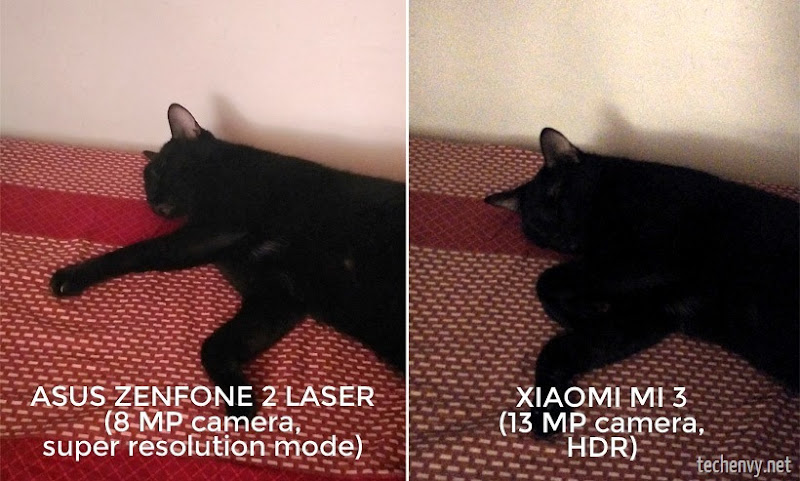 To put the camera to the test, I took photos of my cat while he was sleeping in the dark. Here are the pictures as photographed by the 8MP Zenfone 2 camera (super resolution mode) and the Xiaomi Mi3 13MP camera (HDR). They’re supposed to be grainy – they were taken in the dark, after all. But do you see the big difference?

So, how can an 8MP camera give you a photo with a much higher resolution? It takes four different photos and merges them to give you more pixels. Savvy!

Before I discuss what 3,000 mAh means, let’s talk about lithium-ion and lithium-polymer batteries.

There’s been a lot of hype going around about the lithium-polymer battery. Here’s what it truly means.

Most smartphones nowadays use a lithium-ion batt because it costs cheaper to produce. The more expensive lithium-ion-polymer (or lithium-polymer) battery, on the other hand, uses a different electrolyte and also a different casing made of polymer, thus its name.

Is the lithium polymer battery better than the lithium ion battery? It’s a matter of argument, as you can see here. It’s more expensive, however, which is why I feel the ASUS Zenfone 2 Laser is actually underpriced. 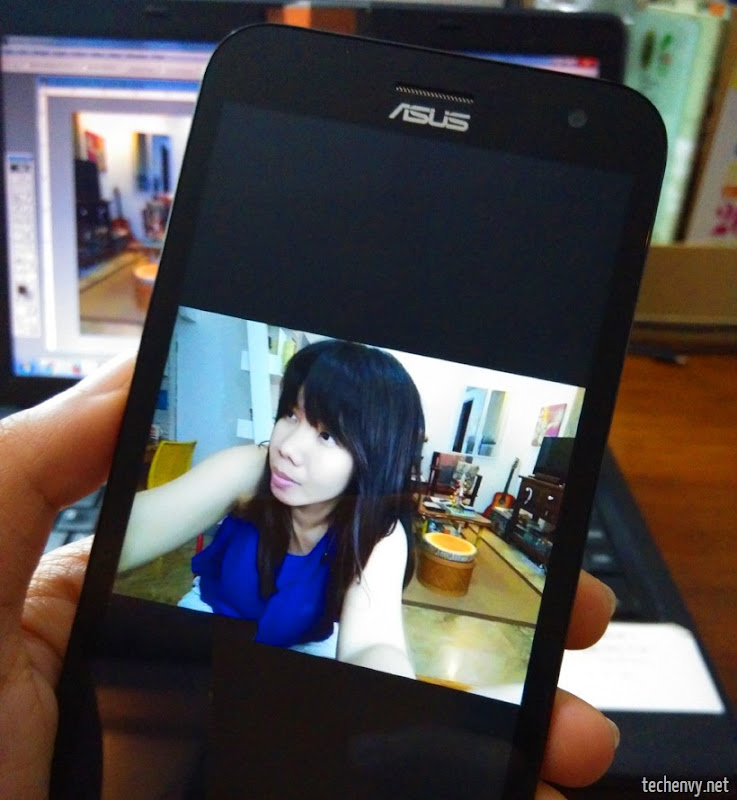 The 3000 mAh Li-Po batt can give you anywhere from 13 to 36 hours of selfies, WiFi, and phone calls. You can keep posting your selfies round the clock, my dear millennial.

Over time, you will get less batt time – it happens to all phones. The good news is, you can always get a new battery. That’s something you can’t always do with other smartphones.

5. Overall, this phone simply doesn’t look like it costs less than PhP8,000!

Judging the proverbial book by its cover, I can see plainly how the ASUS Zenfone 2 Laser doesn’t deserve the price it was given. Mine has a sleek, curved back with a gold, steel-brushed finish. Even compared to the oldie but goodie Xiaomi Mi3, this ZenFone looks more expensive! 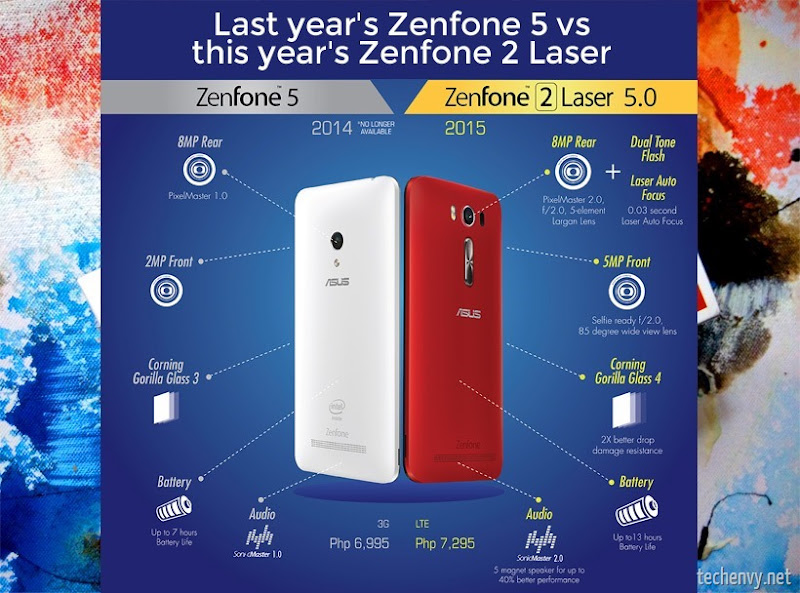 The curved back casing isn’t just an aesthetic plus, by the way. It’s also an ergonomic feature that allows the phone to fit more snugly in your hands. This gives you a better grip so that you don’t drop your phone!

It has a thin edge – not quite 4 mm, in fact – which gives your fingers a better grip. Seriously, these design attributes are important, because the Zenfone is quite light and I feel like I’m going to drop it anytime soon, what with my clumsy fingers.

I like that my fingers can grip its side comfortably, thanks to the sloping back. That’s ergonomic design working for you, baby.

Update:
Here are 5 things I bet you didn’t know about the ASUS Zenfone 2 Laser!
(Oh, and did I mention it’s also a dual sim phone?)

If you want a smartphone that won’t disappoint but your budget is lower than PhP10k, here’s a great option! ASUS Zenfone 2 Laser is just worth PhP7,295. 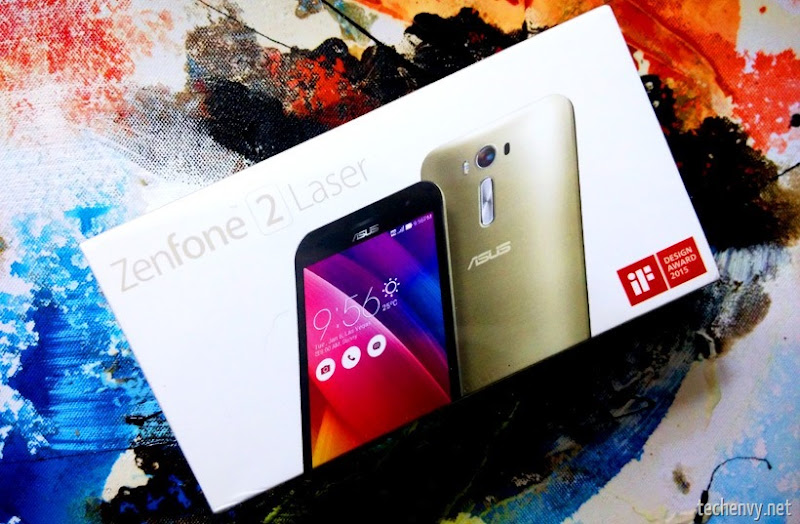 If you asked me, I’d say the new Zenfone was wildly underpriced… but that’s not for you to worry about, right?